Everyone building predictive models or performing statistical fitting knows about overfitting. This arises when the function represented by the model includes components or aspects that are overly specific to the particularities of the sample data used for training the model, and that are not general features of datasets to which the model might reasonably be applied. The failure mode associated with overfitting is that the performance of the model on the data we used to train it is significantly better than the performance when we apply the model to other data.

Statisticians use the term cross-validation to describe the process of splitting the training data into two (or more) parts, and using one part to fit the model, and the other to assess whether or not it exhibits overfitting. In machine learning, this is more often referred to as a "test-training" approach.

A special form of this approach is longitudinal validation, in which we build the model on data from one time period and then check its performance against data from a later time period, either by partitioning the data available at build time into older and newer data, or by using outcomes collected after the model was built for validation. With longitudinal validation, we seek to verify not only that we did not overfit the characteristics of a particular data sample, but also that the patterns we model are stable over time.

Validating against data for which the outcomes were not known when the model was developed has the additional benefit of eliminating a common class of errors that arises when secondary information about validation outcomes "leaks" during the model building process. Some degree of such leakage—sometimes known as contaminating the validation data—is quite common.

As its name suggests, overfitting as normally conceived is a failure mode specific to model building, arising when we fit the training data "too well". Here, we are are going to argue that overfitting is an example of a more general failure mode that can be present in any analytical process, especially if we use the process with data other than that used to build it. Our suggested name for this broader class of failures is errors of applicability.

Here are some of the failure modes we are thinking about:

Changes in Distributions of Inputs (and Outputs)

There's a general issue with choosing values based on data used during development. This concerns the difference between what we will term concrete and abstract values, and what it means to perform "the same" operation on different datasets.

Suppose we decide to handle outliers differently from the rest of the data in a dataset, at least for some part of the analysis. For example, suppose we're looking at flight prices in Sterling and we see the following distribution.

On the basis of this, we see that well over 99% of the data has prices under £4,000, and also that while there are a few thousand ticket prices in the £4,000–£32,000 range (most of which are probably real) the final few thousand probably contain bad data, perhaps as a result of currency conversion errors.

We may well want to choose one or more threshold values from the data—say £4,000 in this case—to specify some aspect of our analytical process. We might, for example, use this threshold in the analysis for filtering, outlier reporting, setting a final bin boundary or setting the range for the axes of a graph.

The crucial question here is: How do we specify and represent our threshold value?

The reason for labouring this point around abstract vs. concrete definitions is that it arises very commonly and it is not always obvious which is preferable. Concrete definitions have the advantage of (numeric) consistency between analyses, but may result in analyses that are not well suited to a later dataset, because different choices would have been made if that later data had been considered by the developer of the process. Conversely, abstract definitions often make it easier to ensure that analyses are suitable for a broader range of input datasets, but can make comparability more difficult; they also tend to make it harder to get "nice" human-centric scales, bin boundaries and thresholds (because you end up, as we saw above, with values like £4,186.22, rather than £4,000).

Making a poor choice between abstract and concrete specifications of any data-derived values can lead to large sections of the data being omitted (if filtering is used), or made invisible (if used for axis boundaries), or conversely can lead to non-comparability between results or miscomputations if values are associated with bins having different boundaries in different datasets.

NOTE: A common source of the leakage of information from validation data into training data, as discussed above, is the use of the full dataset to make decisions about thresholds such as those discussed here. To get the full benefit of cross-validation, all modelling decisions need to be made solely on the basis of the training data; even feeding back performance information from the validation data begins to contaminate that data.

Data-derived thresholds and other values can occur almost anywhere in an analytical process, but specific dangers include:

Other Challenges to Applicability

In addition to the common sources of errors of applicability we have outlined above, we will briefly mention a few more.

In the overview of TDDA we published in Predictive Analytic Times (available here), we made an attempt to summarize how the four main classes of errors arise with the following diagram: 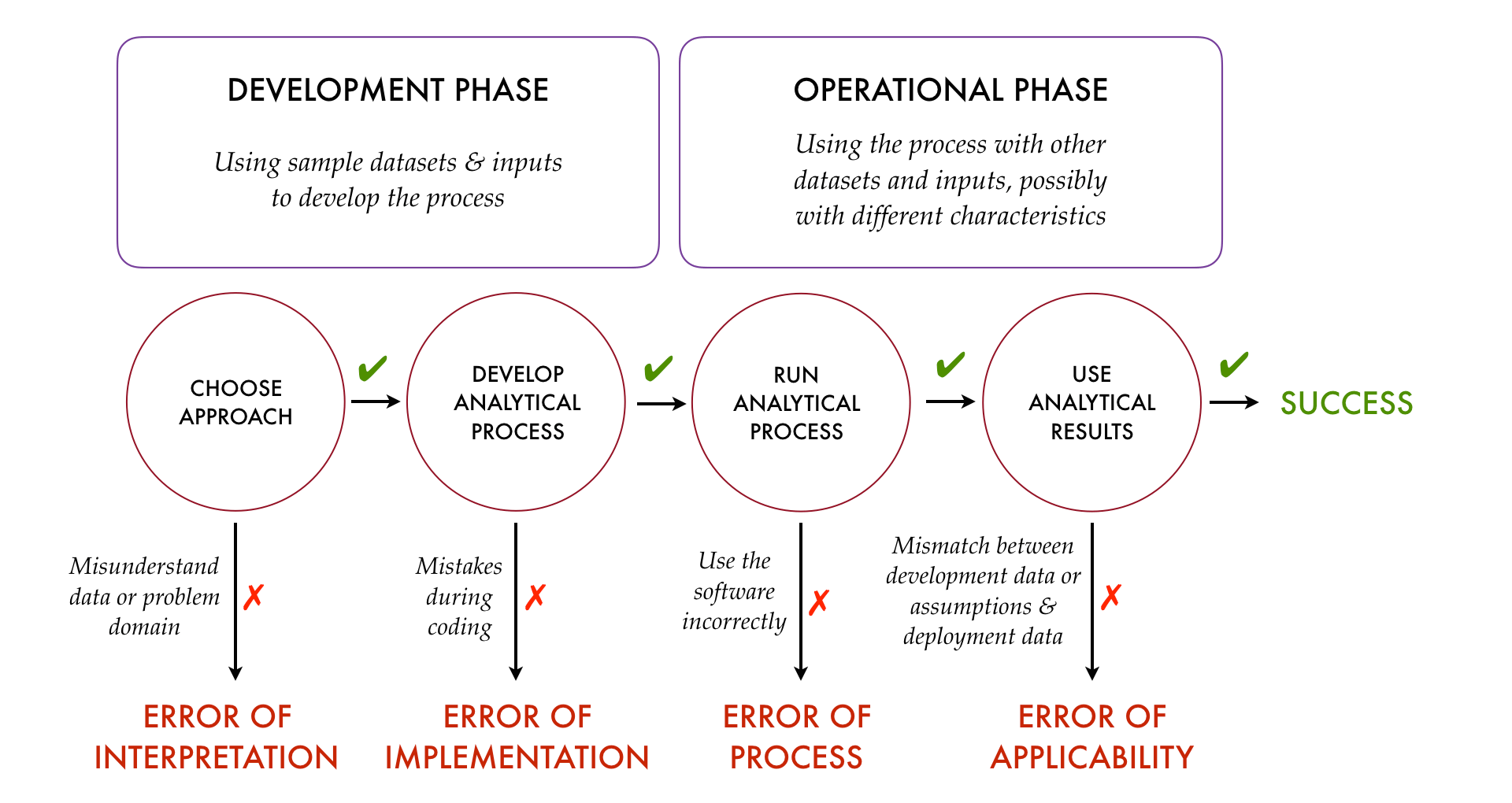 While this was always intended to be a simplification, a particular problem is that it suggests there's no room for errors of interpretation in the operationalization phase, which is far from the case.4 Probably a better representation is as follows: 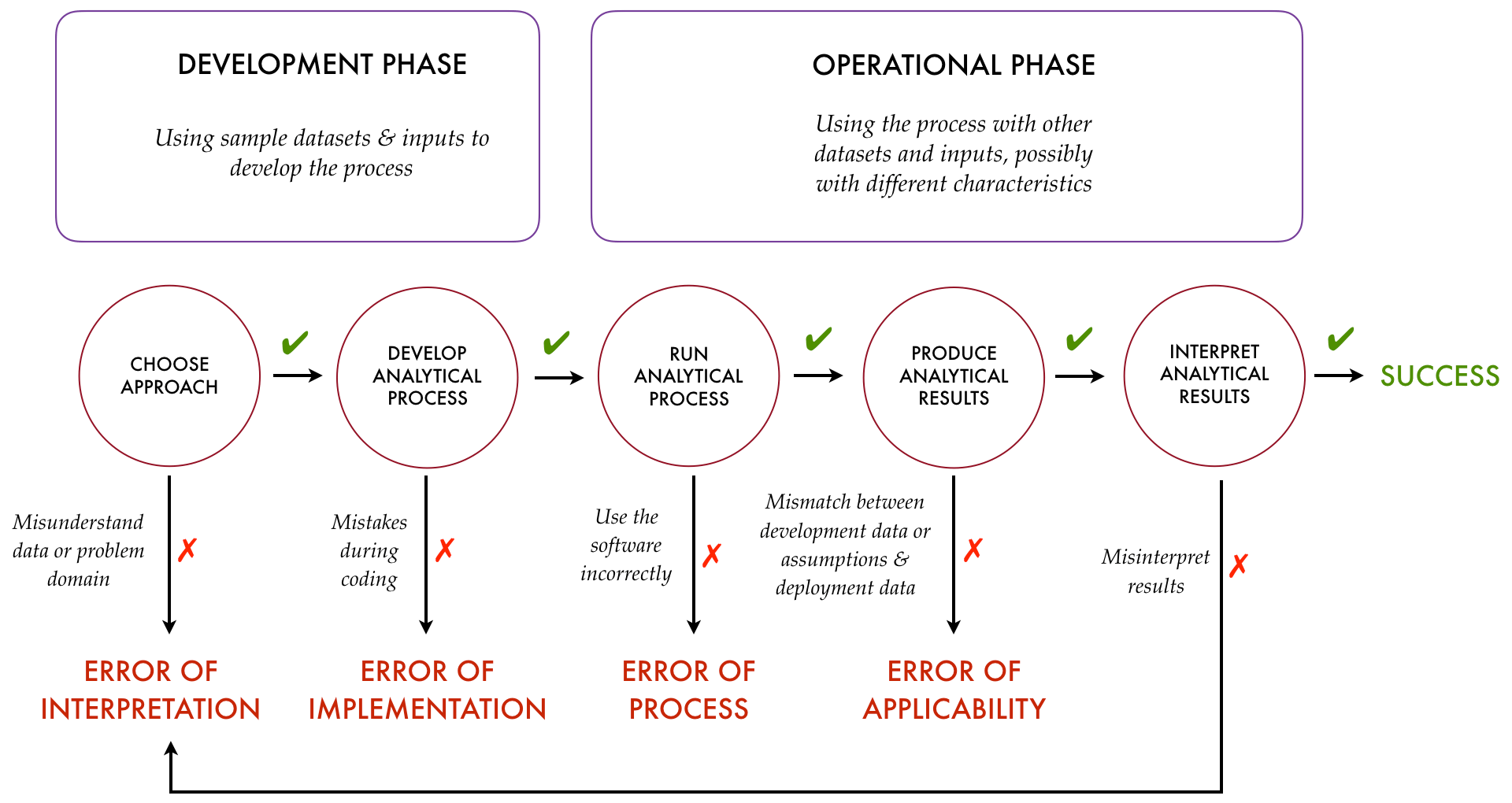