While the idea of regression testing comes straight from test-driven development, the next idea we want to discuss is associated more with general defensive progamming than TDD. The idea is consistency checking, i.e. verifying that what might otherwise be implicit assumptions are in fact met by adding checks at various points in the process.1

Initially, we will assume that we are working with tabular data, but the ideas can be extended to other kinds of data.

Inputs. It is useful to perform some basic checks on inputs. Typical things to consider include:

In addition to basic sense checks like these, we can also often formulate self-consistency checks on the data. For example:

Our goal in formulating TDDA is pragmatic: we are not suggesting it is necessary to check for every possible inconsistency in the input data. Rather, we propose that even one or two simple, well-chosen checks can catch a surprising number of problems. As with regression testing, an excellent time to add new checks is when you discover problems. If you add a consistency check every time you discover bad inputs that such a test would have caught, you might quickly build up a powerful, well-targeted set of diagnostics and verification procedures. As we will see below, there is also a definite possibility of tool support in this area.

Intermediate Results and Outputs. Checking intermediates and outputs is very similar to checking inputs, and all same kinds of tests can be applied. Some further questions to consider in these contexts include:

Transfer checks. With data analysis, our inputs are frequently generated by some other system or systems. Often those systems already perform some checking or reporting of the data they produce. If any information about checks or statistics from source systems is available, it is useful to verify that equivalent statistics calculated over the input data produce the same results. If our input data is transactional, maybe the source system reports (or can report) the number or value of transactions over some time period. Perhaps it breaks things down by category. Maybe we know other summary statistics or there are checksums available that can be verified.

The value of checking that the data received is the same as the data the source system was supposed to send is self-evident, and can help us to detect a variety of problems including data loss, data duplication, data corruption, encoding issues, truncation errors and conversion errors, to name but a few.

A perennial obstacle to better testing is the perception that it is a "nice to have", rather than a sine qua non, and that implementing it will require much tedious work. Because of this, any automated support that tools could provide would seem to be especially valuable.

Fortunately, there is low-hanging fruit in many areas, and one of of our goals with this blog is to explore various tool enhancements. We will do this first in our own Miró software and then, as we find things that work, will try to produce some examples, libraries and tools for broader use, probably focused around the Python data analysis stack.

In the spirit of starting simply, we're first going to look at what might be possible by way of automatic input checking.

One characteristic of data analysis is that we often start by trying to get a result from some particular dataset, rather than setting out to implement an analytical process to be used repeatedly with different inputs. In fact, when we start, we may not even have a very specific analytical goal in mind: we may simply have some data (perhaps poorly documented) and perform exploratory analysis with some broad analytical goal in mind. Perhaps we will stop when we have a result that seems useful, and which we have convinced ourselves is plausible. At some later point, we may get a similar dataset (possibly pertaining to a later period, or a different entity) and need to perform a similar analysis. It's at this point we may go back to see whether we can re-use our previous, embryonic analytical process, in whatever form it was recorded.

Let's assume, for simplicity, that the process at least exists as some kind of executable script, but that it's "hard-wired" to the previous data. We then have three main choices.

Presented like this, the last sounds like the only sensible approach, and in general it is the better way forward. However, we've all taken the other paths from time to time, often because under pressure just changing a few old hard-wired values to new hard-wired values seems as if it will get us to our immediate result faster.4

The problem is that even if were very diligent when preparing the first script, in the context of the original analysis, it is easy for there to be subtle differences in a later dataset that might compromise or invalidate the analysis, and it's hard to force ourselves to be as vigilent the second (third, fourth, ...) time around.

A simple thing that can help is to generate statements about the original dataset and record these as constraints. If a later dataset violates these constraints, it doesn't necessarily mean that anything is wrong, but being alerted to the difference at least offers us an opportunity to consider whether this difference might be significant or problematical, and indeed, whether it might indicate a problem with the data.

Concretely: let's think about what we probably know about a dataset whenever we work with it. We'll use the Periodic Table as an example dataset, based on a snapshot of data I extracted from Wikipedia a few years ago. This is how Miró summarizes the dataset if we ask for a "long" listing of the fields with its ls -l command:

For each field, we have a name, a type, minimum and maximum values and a count of the number of missing values. [Scroll sideways if your window is too narrow to see the Nulls column on the right.] We also have, implicitly, the field order.

This immediately suggests a set of constraints we might want to construct. We've added an experimental command to Miró for generating constraints based on the field metadata shown earlier and a few other statistics. First, here's the "human-friendly" view that Miró produces if we use its autoconstraints -l command. 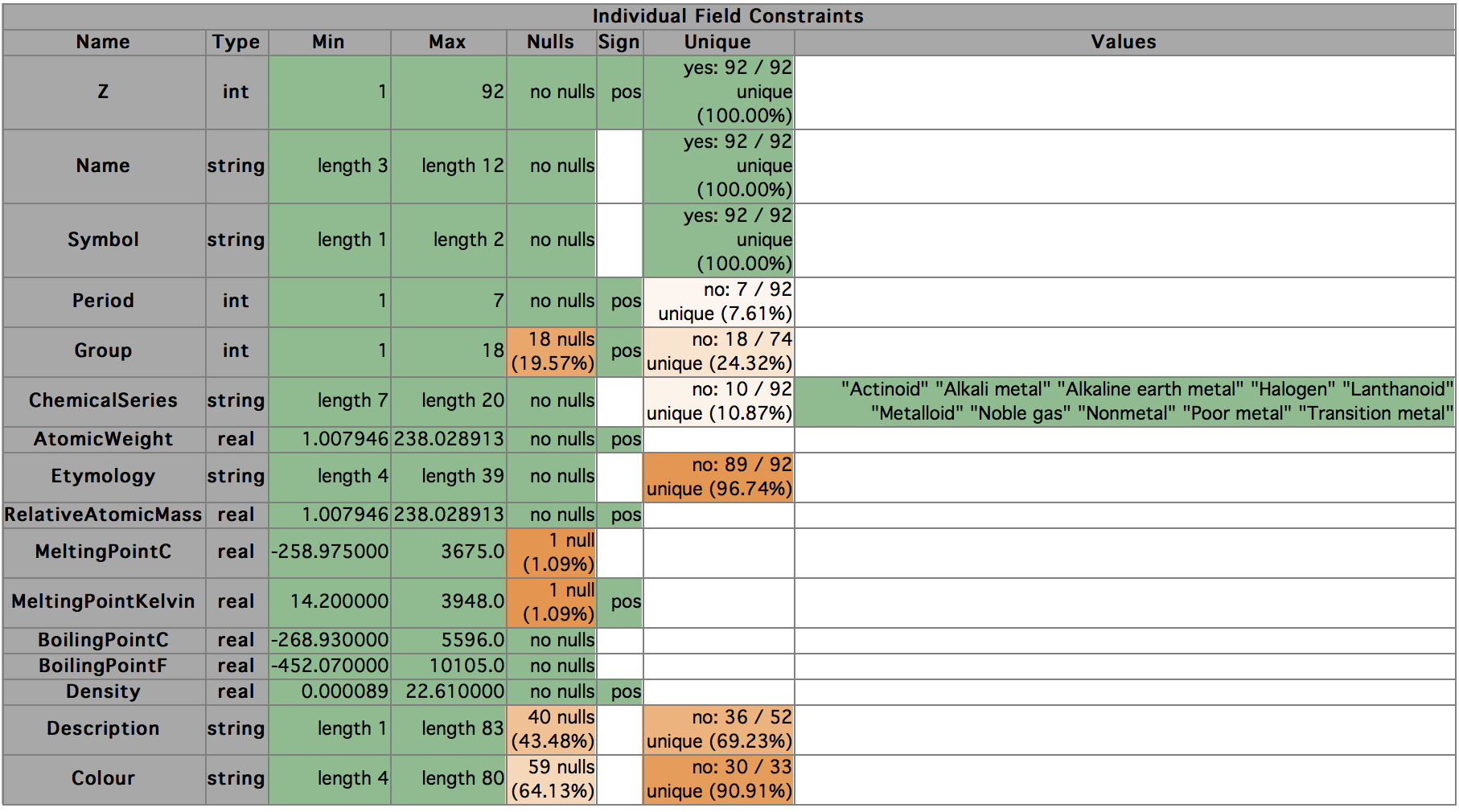 In this table, the green cells represent constraints the system suggests for fields, and the orange cells show areas in which potential constraints were not constructed, though they would have been had the data been different. Darker shades of orange indicate constraints that were closer to be met within the data.

In addition to this human-friendly view, Miró generates out a set of declarations, which can be thought of as candidate assertions. Specifically, they are statements that are true in the current dataset, and therefore constitute potential checks we might want to carry out on any future input datasets we are using for the same analytical process.

Each green entry in the table maps to a declaration in this list. Let's look at a few:

In addition to these constraints, we should also probably generate constraints on the field types and, as we will discuss in future articles, dataset-level constraints.

In this case, the failed declarations are mostly unsurprising and untroubling. The maximum values for Z, AtomicWeight, RelativeAtomicMass, and Density all increase in this version of the data, which is expected given that all the new elements are heavier than those in the initial analysis set. Equally, while the fields AtomicWeight, RelativeAtomicMass, Etymology, BoilingPointC, BoilingPointF and Density were all populated in the original dataset, each now contains nulls. Again, this is unsurprising in this case, but in other contexts, detecting these sorts of changes in a feed of data might be important. Specifically, we should always be interested in unexpected differences between the datasets used to develop an analytical process, and ones for which that process is used at a later time: it is very possible that they will not be handled correctly if they were not seen or considered when the process was developed.

There are many further improvements we could make to the current state of the autoconstraint generation, and there are other kinds of constraints it can generate that we will discuss in later posts. But as simple as it is, this level of checking has already identified a number of problems in the work we have been carrying out with Skyscanner and other clients.

We will return to this topic, including discussing how we might add tool support for revising constraint sets in the light of failures, merging different sets of constraints and adding constraints that are true only of subsets of the data.

Outputs and Intermediates. While developing the ideas about automatically generating constraints, our focus was mostly on input datasets. But in fact, most of the ideas are almost as applicable to intermediate results and outputs (which, after all, often form the inputs to the next stage of an analysis pipeline). We haven't performed any analysis in this post, but if we had, there might be similar value in generating constraints for the outputs as well.

Living Constraints and Type Systems. In this article, we've also focused on checking constraints at particular points in the process—after loading data, or after generating results. But it's not too much of a stretch to think of constraints as statements that should always be true of data, even as we append records, redefine fields etc. We might call these living or perpetual constraints. If we do this, individual field constraints become more like types. This idea, together with dimensional analysis, will be discussed in future posts.